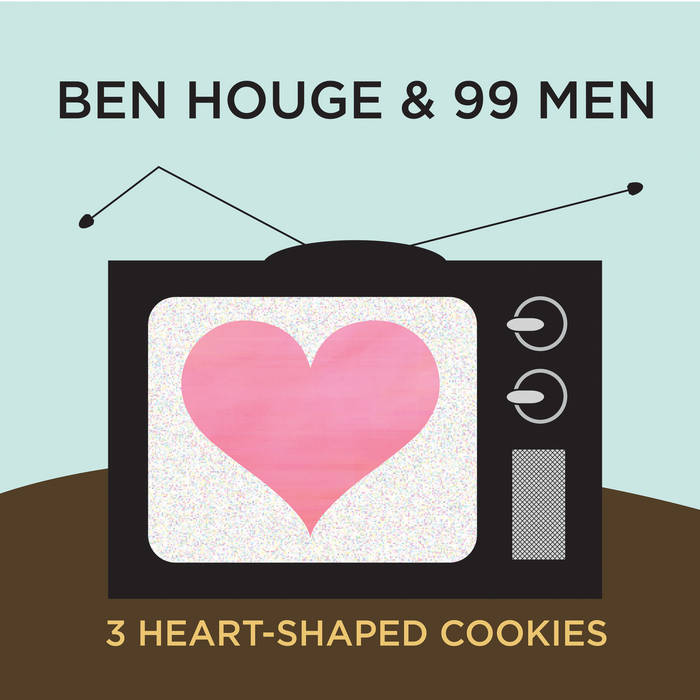 "Love on TV" is one of the quickest songs I‘ve ever written. It must have been a Saturday morning in early February 1997. I was reading the newspaper (I used to subscribe to the Seattle Post-Intelligencer), and there were two articles side by side: one by Martha Stewart telling me how to make the perfect heart-shaped cookies for Valentine's Day, and one about all the Valentine's Day specials on television, with a picture of that guy from "Mad About You" and Aliens. I think the song was done in about 2 hours. As you may surmise, I did not have a Valentine that year. I used to perform this tune for small groups of friends as a loungey, kind of mopey, electric piano-led number.

A few years later, this song also marked the beginning of my rock collaboration with fellow former Sierra sound guy Mike Caviezel. I had been working on a promising videogame prototype; it would have been a new King's Quest game, re-imagined as a platformer for consoles. Then on Valentine's Day 2002, the executive producer of the project called us into a meeting room with his mouth full of turkey sandwich and mumbled, "Well, there's no good way to say it, guys," and I thought, "How about swallowing first?" With our game so unceremoniously cancelled, I gave myself the afternoon off. I went into Mike's office and told him he had to stop what he was doing; we had a hit single to record. We knocked out this new arrangement pretty quick, thanks to Mike's impeccable rock chops.

We were both pleased with the results, and Mike asked if I had any other old tunes I wanted to work up rock-style, so I pulled out "Late Life," which I must have written not too long after "Love on TV." It describes a pretty common experience I had shortly after moving to Seattle: going out on the town to catch some live music, driving across the bridge from Bellevue, where I worked, to Seattle, where the action was, and having the odd sensation of being very alone in a busy, crowded place. (I would often use an ancient online listings guide called sidewalk.com, which receives a shout out, to check event addresses and show times.) I used to haunt the OK Hotel, down underneath the Alaskan Way viaduct, which I'm told was featured in the film Singles (which, I must admit, I have yet to see). Wayne Horvitz's group Zony Mash, my favorite Seattle band, would often play there, until the place was condemned after the Nisqually earthquake in 2001, and the scene moved over to the 700 Club.

On the particular night described in the song, I was at the OK Hotel, and there was a band named McKinney, I think, or something like that, and I remember humming along to their cover of Prince's "When Doves Cry." The headliner was a bit of a letdown, a solo set by Golden Palominos alumna Lori Carson. I really wasn't into it, but she had one song that stuck with me, with a refrain that went, "I wish I had your head in a box." The initial version of "Late Life" was also pretty loungey and mopey, and I have a sloppy recording somewhere that features a djembe and uses a pair of Birkenstocks as a percussion instrument.

Since these two songs had been such fun to put together, I decided to write a new song for us to work up, "Kiss Locally," about the pleasures and travails of a long-distance relationship. It's chock full of alliteration and changes of meter, and it modulates to the dominant for the guitar solo, an occasion to which Mike rises.

In the midst of all this activity, Mike came in to my office one day and said, "Here's the plan: we're going to start a band, and you're going to play bass." I had barely a working knowledge of the instrument, but I nonetheless gamely agreed, and we began rehearsals, with his childhood chum Sandy Leek on drums, and my new music cohort Korby Sears on rhythm guitar. Our repertoire included these three songs of mine, plus a whole backlog of rocking numbers Mike had been working on. Eventually, for reasons practical, artistic, and altogether amicable, Korby and I seceded to form Subpoenaed Lemur and do more quirky material with canned drums and costumes, while Mike found replacements with a more thorough rock pedigree. Together they adopted the band name 99 Men (after Mike's song "99 Man") and released the slamming album "So Last Century" in 2004. (I sang some backing vocals on the track "Big Party," and helped with the arrangement, particularly the backwards guitar intro.)

That same year, I moved to Shanghai, and for a long time "Kiss Locally" was the most recent pop song in my catalog, as I turned my attention to other genres, performing sets of ambient electronic laptop stuff around Shanghai. My days for the past 3.5 years have been occupied with being the audio director of Tom Clancy's EndWar, a big real-time strategy game for Xbox 360 and PS3, developed by Ubisoft and released on Nov. 4, 2008. The masterfully rocking soundtrack for the game was written by some other good friends from my Seattle days, Alistair Hirst and Matt Ragan of Omni Interactive Audio, and I think together we've achieved a new milestone in responsive game soundtracks.

While working on EndWar, inspired by the slamming soundtrack we were assembling, I got an idea for a new song, pieced together during my lunchtime trips to the gym, that would sum up the game's main thrust. I quickly realized this would be a good chance to give Mike a call and get the old band back together for an intercontinental collaboration. The result is the tune "EndWar," which plays over the game's end credits.

I did my best to get the EndWar soundtrack released as a digital download before leaving Ubisoft two months ago, but to no avail. So Mike and I thought that at least we could get these other tunes by Ben Houge & 99 Men out there on the internet for interested parties to enjoy. (We're also working on a small scale physical CD release, but it will likely only be available in China, since that's where I live.)

So please enjoy them!

The CD release party for 3 Heart-Shaped Cookies took place at Yu Yin Tang in Shanghai on March 22, 2009. I performed a set of quasi-acoustic pop songs as the opening act for my friends itta and Marquido, the Korean/Japanese duo then known as 10, who now perform as TENGGER (more about their awesome work here: tengger.net).

Here’s a fun time capsule of an interview I did with Shanghaiist that talks a bit more about the release of 3 Heart-Shaped Cookies:
shanghaiist.com/2009/03/21/shanghaiist_interviews_ben_houge.php

Ben Houge is involved in a variety of sound-producing activities. He's worked in the game industry since 1996 (Sierra, Ubisoft, Microsoft). From 2004 to 2010, he lived in Shanghai, where he was active in the underground sound scene. These days he mainly works with chefs to create soundtracks for dining experiences. More info at www.benhouge.com. ... more

Bandcamp Daily  your guide to the world of Bandcamp